Duration: Any length | Best time to travel: All year round

Explore the rich culture and history of Zanzibar with a visit to the Prison island with dhow. See the large tortoise that inharbit the island. As well, you will have opportunity to smorkel at the coast. Gratifully you will admire the stunning landscape as you swim with colorful fish.

It is the only forest in island located in central east region of Zanzibar island. It is about 20 minutes driving from Stone town, a narrow neck of land between the Chwaka bay in the north and Uzi bay to the south. It contains about 100 tree species from total of 43 families. This is for endermic red faced Colobus Monkey. The forest consists of large mangrove swamp and a tract of natural forest which is the home to few unique species of wildlife including the sykes monkey, 40 species of birds, bush babies, aders duiker and over 50 species of butterfly

Start from Stone town to Spice farm, discover the unique mixture of Arabs, Persians, Indian and European imfluences in a town of Stone town and its main sights. Visit a real spice farm where you can see, taste and smell the freshest products before sovoring lunch at a local restaurants.

Visit the historical sites of Zanzibar slave trading markets. Explore Dhow harbor at Malindi where slave ships brought their human cargo from Bagamoyo to Zanzibar. As well you can see the house of the notorious Arab slave trader and the site of the old slave market.

Matemwe Beach, a must spot to be at

The best place to relax, refresh and laying along the coast along with the finest white sand in the world. Snorked as well you will find prestine fishing communities and more fish markets. For the water lovers, depending on time, it can be a bit difficult to swim in the ocean especially during low tide which is relatively strong in this part of the island. As well you will see wheat and sea urchin between the beach and the open water.

During high tide, you can access warm Indian ocean without a problem. Put on some proper shoes and have a walk through the tidal flat white sand

It is a single small island located about 3km off the north-east coast of Unguja. It is surrounded by an oval reef, seven by four kilometers in extent. These reefs have been declared a  marine conservation area. Plants found in the area are named Mivinje (Paine spices) trees.

Mnemba island and its reef sometimes mistakely are called Mnemba Atoll which is an island that encirles a lagoon.

Mnemba island is a popular for scuber diving site, with a wide variety of corals and associated large species such as turtles and dolphins. The best calm conditions are most frequent in November and March with maximum visibility as Mnemba is a private island. It is very easy to visit Mnemba island from Matemwe village, just 20 minutes with boat.

The top attractions to visit at Nungwi include:-

Nungwi is village at the northern end of Unguja island, familiarly called Zanzibar. It is well known for the wide, palm lined Nungwi beach and a nearby boat building yard for the production of traditional dhows. The Mnarani marine turtle conservation pond shelters green and hawksbill. See turtles in a tidal lagoon off the coast, coral reefs teeming with colorful fish including Hunga and Laven bank. 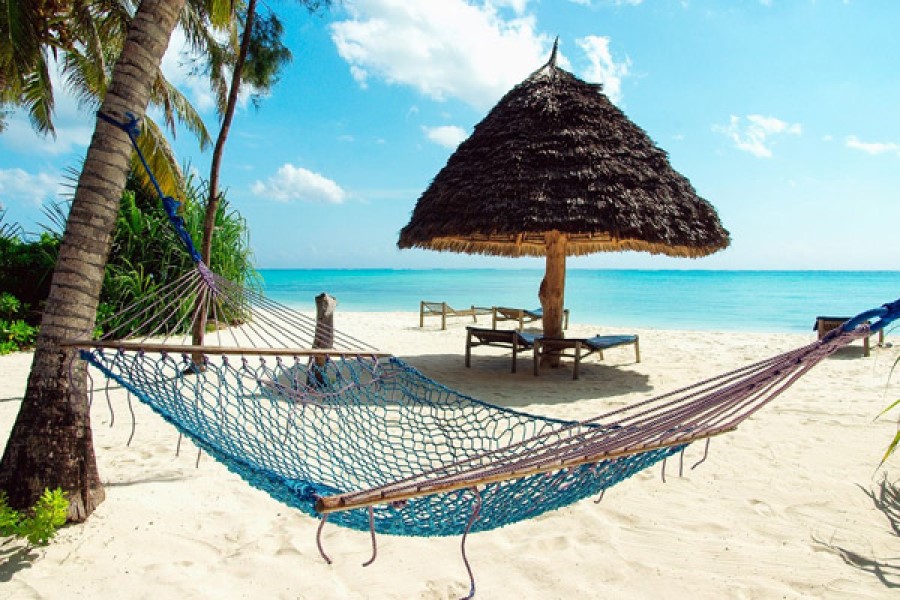